BIRMINGHAM, Ala., (Dec. 7, 2017) – The UAB men’s basketball team and head coach Robert Ehsan have partnered with the Mike Slive Foundation for Prostate Cancer Research in the fight to block cancer.

Coach Ehsan and the entire men’s basketball staff along with all 13 players will make a donation for every block recorded during the 2017-18 Conference USA season. Blazer fans and community members are encouraged to make a donation and join Mike Slive Foundation’s effort to put a stop to prostate cancer. 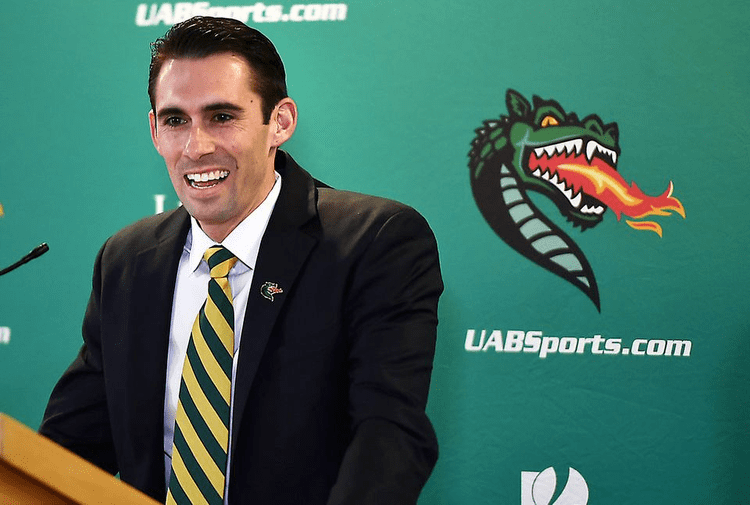 “Part of our mission as a program is to give back to the community and the ability to associate this cause with something we have excelled at on the basketball court makes this partnership extremely unique, special and rare,” Ehsan said. “I’ve had the pleasure of spending significant time with Mike Slive over the past few years and he’s been one of our biggest supporters and advocates of our program. His role as Conference USA Commissioner was instrumental in helping UAB transition into the league and we couldn’t be more excited about joining forces with his foundation in the fight against cancer.”

UAB has proven to be one of the top shot blocking teams in the NCAA since the start of the 2014-15 season. In fact, the Blazers have the seventh-most blocks of any team in the NCAA during that time with 576. Last season, UAB blocked 161 shots and ranked 25th in the NCAA with 4.9 per game. The Blazers have blocked an average of 182.3 shots over the last three seasons and each of those seasons have resulted in an amount that ranked among the top five in school history.

“Our student-athletes and coaches take a great deal of pride in using their platform for something greater than themselves,” UAB Director of Athletics Mark Ingram said. “We are extremely excited to have Coach Ehsan and our basketball program partner with Mike Slive and his foundation to raise awareness and money for such a worthy cause.”

Prostate cancer is the most common cancer among men (after skin cancer) and is the second leading cause of death from cancer in men. Typically occurring in older men, prostate cancer will be diagnosed in about one in seven men in their lifetimes.

The good news is that with early detection and more cutting-edge research, additional lives can be saved. The Mike Slive Foundation for Prostate Cancer Research is a new weapon in the fight against prostate cancer with a very simple mission: Saving lives by funding cutting-edge prostate cancer research.

“No man should die from prostate cancer. That is the goal of The Mike Slive Foundation. We can make sure that happens by funding cutting-edge prostate cancer research and by early detection,” Slive said. “We are thrilled to partner with Coach Ehsan, his staff and the entire UAB basketball team to help us reach our goal to end prostate cancer.”

The Mike Slive Foundation endeavors to become a global leader in the fight to eradicate prostate cancer through public awareness and research funding in memory of Mike Slive, a transformative leader whose vision and direction revolutionized the business of collegiate sports.

About the Mike Slive Foundation

The Mike Slive Foundation for Prostate Cancer Research was founded in Birmingham, Alabama, by attorney Ed Meyerson and former SEC and Conference USA Commissioner Mike Slive. Composed of local business, medical and political leaders, the Foundation’s mission is to save lives by funding cutting-edge research and by raising awareness of prostate cancer. The Mike Slive Foundation is a new weapon in the fight against prostate cancer. Follow us on Twitter, Facebook and Instagram @MikeSliveFdn.